According to the data presented by the president of Afrucat, Montse Baró, the president of the Committee of Apples and Pears of Afrucat, Joan Serentill, and the Secretary of Food of the Department of Climate Action, Food, and Rural Agenda of the Generalitat de Catalunya, Carmel Mòdol, Catalonia is forecast to produce 23% fewer apples and 24% fewer pears than in 2021.

The sector expects to achieve the lowest pome fruit harvest in the last 5 years because of spring frosts, which also seriously affected Catalonia's stone fruit harvest. Expectations are producers will harvest 229,400 tons of apples and 101,100 tons of pears.

According to Carmel Modol, "this drop is exclusively due to weather conditions. Statistics show pome fruit plantations have been growing slowly in recent years and there have been no setbacks detected.”

The frosts affected all crops in the Ebro Valley, which predicts a similar decrease. It should be noted, however, that the district of Girona was not affected by the frost and that, despite suffering a slight production decrease compared to last year's production*, its production increased by 6% over the average of the last 5 years. (*In 2021 Girona achieved a record production figure)

Pears
According to forecasts, Catalonia will produce 101,100 tons of pears this year, i.e. 24% less volume than last year. This significant impact on production is also due to the frost.

The Ercolini and limonera varieties experienced the greatest setbacks, as their production fell by 43% and 31% respectively.

According to forecasts, the apple and pear campaign will be delayed by 3 to 7 days, the quality of the fruits will be good, and fruit sizes will be lower than the ones achieved in the previous campaigns, with the exception of the Girona apple, which will yield normal to big sizes.

Baró and Serentill wanted to ease the distribution: "We can ensure that, even if production falls, we'll supply our national customers with the qualities and volumes they expect from us." 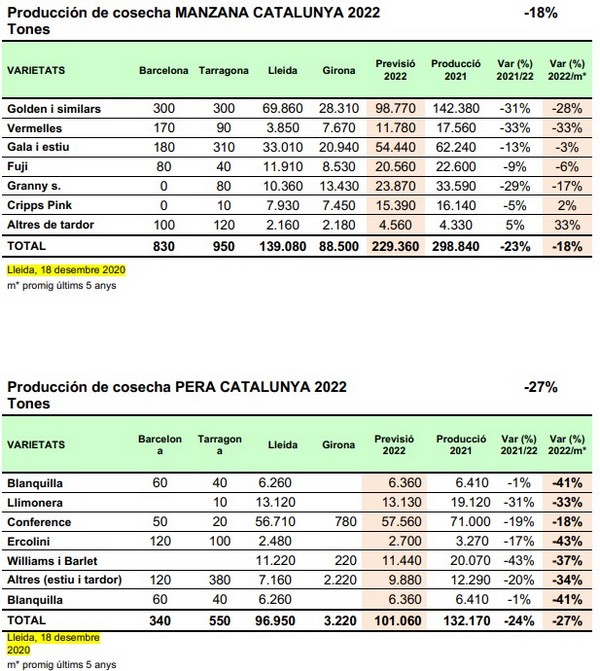 Drought Survey: The Role of Satellite Data in Agricultural Insurance

Drought damage to the agricultural industry is increasing every year. Farmers, governments and the international development community are seeking for best ways to effectively address the consequences of drought on agriculture worldwide, as well deploying the optimal insurance solutions that can support this.

More than three weeks after the Cumbre Vieja volcano erupted, the lava that continues to flow from its interior continues to devastate everything in its path, destroying houses, infrastructure, and banana plantations. The production of Platanos de Canarias is the economic engine of the island, accounting for 50% of its GDP and 30% of the jobs on the island.

Farmers across eastern Australia are preparing for the possibility of a “wet drought” and major crop losses as parts of New South Wales and southern Queensland brace for more wet weather and flash flooding.

In Gaza, the harvest season of dates starts in late September and lasts until the end of October. The area has about 12,000 dunams (1,200 ha) of agricultural land for palm trees. According to the Agriculture Ministry, about 8,500 dunams are fruitful while the rest are currently unproductive.

Andalucia in southern Spain is home to Europe's largest avocado plantations. These fruits are sought after, but they require special care. Each kilogram of fruit needs 800 liters of water.

The Australian Bureau of Meteorology is warning residents in the north of the country to be on alert for a greater possibility of cyclones developing and potential flooding in coming months, as the region enters its third La Niña wet season in a row.

The remnants of Hurricane Ian had minimal impact on Perquimans County during the storm’s passing over the region Friday night. The storm’s strong winds — wind gusts reached 35 mph — did spur power outages and block roadways with downed tree limbs.

The Sindh Abadgar Board (SAB) has sought 50 per cent fertiliser subsidy for upcoming rabi and kharif crops, claiming that recent monsoon rains and flash floods had destroyed almost 70pc of kharif crops in Sindh which was ready to be harvested and inflicted estimated loss of Rs350 billion to farmers, livestock farm owners.

Collapsed barns, flattened crops and a harvest that will be impaired by both the impacts of heavy rain and downed trees in fields. That is the legacy Post Tropical Cyclone Fiona left to agriculture producers in PEI when it passed through the province with the force of a category 2 hurricane.

Three general insurance companies are yet to give ₹446.52 crore, or about 33 per cent, of the estimated claim of ₹1,363.2 crore under the Pradhan Mantri Fasal Bima Yojana (PMFBY) to the farmers in Odisha till mid-September, according to a state government review.